In 2017, the Garden Club of East Hampton opened the Mary Nimmo Moran Garden at the home of Thomas and Mary Nimmo Moran, the first artist’s studio in East Hampton. The Studio also served as the Moran’s home, and it is being restored by The Thomas Moran Trust. GCEH has recreated the garden, originally designed by Mary Nimmo Moran, based on old photos and her painting of the garden dated 1894. The garden was planted in the Grandmother’s Garden style popular at the end of the 19th century. Inspired by the nation’s 1876 centennial, the Grandmother’s Garden was filled with colorful and fragrant flowers reminiscent of colonial gardens. These plants were widely available at the time, through seed catalogues and nurseries that flourished along the East Coast and shipped long distances by rail. Susan Cohen, Fellow in the American Society of Landscape Architects, designed the garden, and it is now maintained by GCEH.
Click HERE to View/Download the Moran Garden Border Description of Plants!

East Hampton Railroad Station
Railroad Avenue between Newtown Lane and Race Lane
The Garden Club of East Hampton’s first public garden project was at the Railroad Station, planted in the 1920’s. Today, oakleaf hydrangea, inkberry, ‘Natchez’ crape myrtle and Montauk daisies serve as a backdrop for the red Dortmund roses that vigorously trail over split-rail fences and welcome visitors to the Village. Garden Club members prune the roses several times a year, and assist the Village in maintaining the shrubs and other plantings. 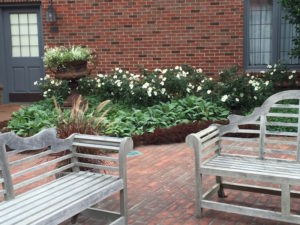 The Brick Courtyard Garden
at the East Hampton Library
159 Main Street
Designed and installed in 2014, The Brick Courtyard Garden features a bed of White Knockout Roses with Stachys byzantina, or lamb’s ear, and sedum in the foreground, two beds of Chinoides Rhododendron with Lady’s Mantle, and other perennial under-plantings.  A camellia was transplanted from the former Grace Lee Roberts Garden that we turned over to the new Children’s Wing addition at the Library. Seven planters throughout the garden are beautifully designed by a member each spring for added interest.    A team of our members water and weed the new plantings in the courtyard throughout the growing season.

Rachel’s Garden at Mulford Farm
10 James Lane
A recreated 18th century dooryard garden, Rachel’s Garden at historic Mulford Farm is comprised not only of a number of the plants that were grown by the colonists for medicinal, culinary, dyeing and housekeeping purposes, but also to supply the home with fresh cut flowers as well. Rachel’s Garden was designed and planted by Garden Club members, who work throughout the growing season to maintain the garden.
Click here for 2014 slideshow / Photo credit: Durrell Godfrey
Click here for 2015 slideshow / Photo credit: Julie Sakellariadis 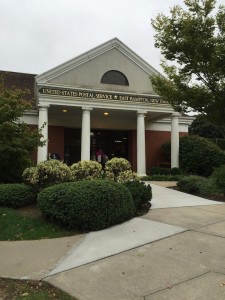 Post Office Project
57 Main Street
In 2006, the grounds at the East Hampton Post Office were renovated and relandscaped by The Garden Club of East Hampton.  Working with the Postmaster, the Club ensures continued organic maintenance of the plantings. In October 2015 we added 45 single white Helleborus x hybridus plants to the east beds, and 4 new Viburnum tomentosum ‘Summer Snowflake’ to replace shrubs that died.

Millstone Garden Park
Inspired by the Village Administrator, the Garden Club designed, installed and maintains a charming vest-pocket garden of traditional East Hampton plantings, featuring Kousa dogwoods (Cornus kousa) and Hydrangea arborescens Annabelle’, with a lovely stone walkway leading to an antique millstone. Both the palette of plants used and colors (green and white) are limited to convey a sense of serenity in the midst of the Village. The attractive benches, two named by GCEH and one donated by the Village to commemorate our centennial in 2014, have become a popular resting place for weary shoppers. Stop by in fall to see our display of Montauk daisies, and visit in spring to see white bleeding hearts and white daffodils.
Click here for 2015 slideshow / Photo credit: Julie Sakellariadis 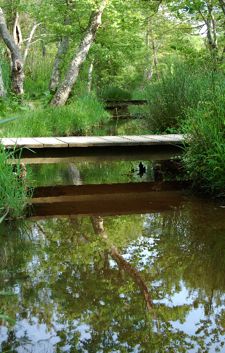 Nature Trail / David’s Lane
In 1934 and 1936 two members (Mrs. Woodhouse and Mrs. Donoho) gave “on loan” to GCEH land between Fithian and David Lanes to be maintained as a nature preserve for the purpose of studying wild flowers and the use of school children in the study of nature. The Garden Club built simple bridges and paths throughout the area.  In 1951 the land was deeded to the Village. Currently there are 28 acres comprising a continuous strip of wetlands from Fithian to Davids Lane.  In 2001 The Garden Club, with the LVIS, began a long-range revitalization project, including shoreline stabilization, extensive removal of dead trees and invasive vines, and replanting of native shrubs, trees and plants.